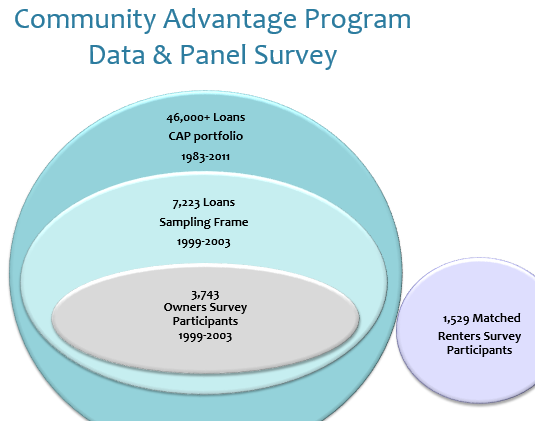 At the center of the CAP Study is data from the Community Advantage Panel Survey (CAPS), an 11-year panel survey of approximately 5,000 low- and moderate–income home owners and renters fielded annually during the period of 2003-2014. The homeowners recruited to participate in CAPS received mortgages between 1999 and 2003 through the Community Advantage Program, and the participating renters were recruited to match these homeowners with respect to geographic proximity and income ceilings.

The survey collects a wide variety of information, including demographics and family formation, mobility and housing tenure choice, unemployment, wealth and asset holdings, social capital and civic engagement, and housing satisfaction. The survey period spans a full housing market cycle, comprising the housing market boom that ended in 2006, the housing market decline that ushered in the recession of 2007-2009, and the subsequent recovery. Thus, the CAP Study data, which includes CAPS response data, provides a means for researchers to answer a broad range of questions with respect to low- and moderate-income homeownership in the context of community reinvestment lending and under varied market conditions.

The data sets reflect the dual-sample structure of the survey, with one series of data sets containing data for survey participants who were homeowners at the beginning of the survey period and received CAP mortgages (i.e. the owners sample), and one series of data sets for survey participants who were renters at the beginning of the survey period (i.e. the renters sample).  Although some survey participants changed residential tenure status during the period of the survey, for data storage purposes each case remains part of the sample to which it was assigned at baseline. The data collected for each sample are stored in year-specific SAS datasets that reflect the timing of data collection. The documentation available for each survey year consists of annual data collection reports, questionnaire specifications, and codebooks.

Per the guidelines of the UNC Institutional Review Board, all of the survey data included in our public-use data (Tier 1) CAP Study offering have been de-identified.  In addition to direct personal identifiers, all geographic location information and variables that contain open-ended text responses, which could potentially be used to identify respondents, have been removed from the data.