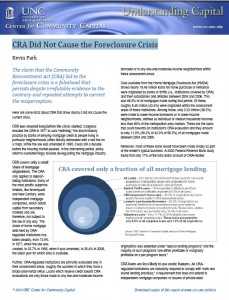 The claim that the Community Reinvestment Act (CRA) led to the foreclosure crisis is a falsehood that persists despite irrefutable evidence to the contrary and repeated attempts to correct the misperception.

This policy brief reviews the large body of evidence that show clearly CRA and its policy to expand home lending did not cause the foreclosure crisis.

Clear evidence shows that CRA covered only a small fraction of mortgage lending, including risky subprime lending and mortgage-backed securities, in the years leading up to the foreclosure crisis. Further, CRA loans are less likely to default than loans by less-regulated lenders.

The lesson from this evidence is that sustainable homeownership depends on the quality of the loan product. CRA promoted safe and sound lending to low-income borrowers, but the law failed to keep pace with changes in mortgage lending, such as the rise of the secondary market and independent mortgage companies. Less-scrupulous lenders were able to exploit the uneven playing field during the housing boom.

Preventing another crisis requires policies that promote constructive lending and are universally applied.