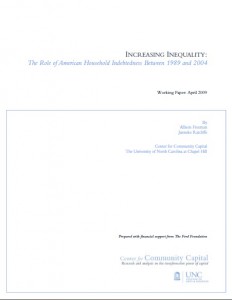 This paper provides an analysis of American indebtedness between 1989 and 2004 in order to address the following question: have growing levels of indebtedness and differential uses of debt exacerbated economic inequality in America since the 1980s?

The paper considers debt from an instrument perspective using data from the Survey of Consumer Finances; all analyses are disaggregated by income group, race/ethnicity, tenure, and educational attainment.

The authors conclude that the differing ability of Americans to use debt productively served to exacerbate economic inequality over time.  Inequality in terms of financial insecurity either remained strong or increased over the time frame, with those who have historically had less wealth and lower incomes being hardest hit.