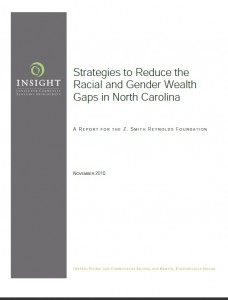 The economic and foreclosure crisis has highlighted the alarming gap in wealth and assets between people of color and whites in the United States. Research has shown that the racial wealth gap, which exists independently of the income gap, was 16 cents to the dollar between people of color and whites in 2007, and has since widened significantly due to the recent and ongoing foreclosure crisis. Policy makers have begun to realize that closing the wealth gap is even more important than addressing the income gap as a way to end poverty and create an equitable society.

This report describes an innovative framework and set of strategies the team developed to help close racial and gender wealth gaps.