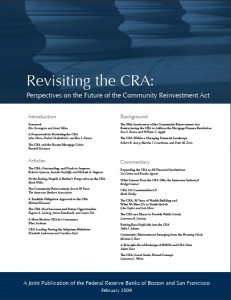 The Community Reinvestment Act (CRA) of 1977 responded to charges of redlining and discrimination
by financial institutions. It induces depository institutions to “help meet the credit needs of the local communities in which they are chartered” in a manner “consistent with the safe and sound operation of such institutions.” With these guiding principles and broad regulator discretion as to how to implement them, the act has proven flexible and adaptable over time.

Much has been written in both critique and defense of the CRA. Critics suggest that this government meddling distorts markets, but evidence from CRA-covered institutions indicates that the act has led to an increase in related lending activities in minority and low- and moderate-income neighborhoods without negatively impacting profitability.In the wake of the subprime meltdown, this debate has taken on a new dimension: some blame the CRA for the crisis, while others—including the Comptroller of the Currency and the CEO of Bank of America—dismiss the notion. As former Federal Reserve Governor Randall S. Kroszner recently asserted, “the evidence does not support the view that the CRA contributed in any substantial way to the crisis in the subprime mortgage market.”

In this piece, we present our own evidence that CRA activity can be undertaken in a safe, sound, and  profitable manner, but we also go further. Our opinion, based on a CRA-related mortgage program and data on the CRA Service Test (along with observations on the prevalence of check cashers and payday lenders in low-income geographies), is that there has been rather too little CRA. The recent subprime crisis puts into stark relief the misalignment between the intent of the CRA and the reality of the financial services landscape. This paper examines aspects of the incentive mechanisms of the CRA, considering those that work well and those that should be adjusted to strengthen the act’s effectiveness.