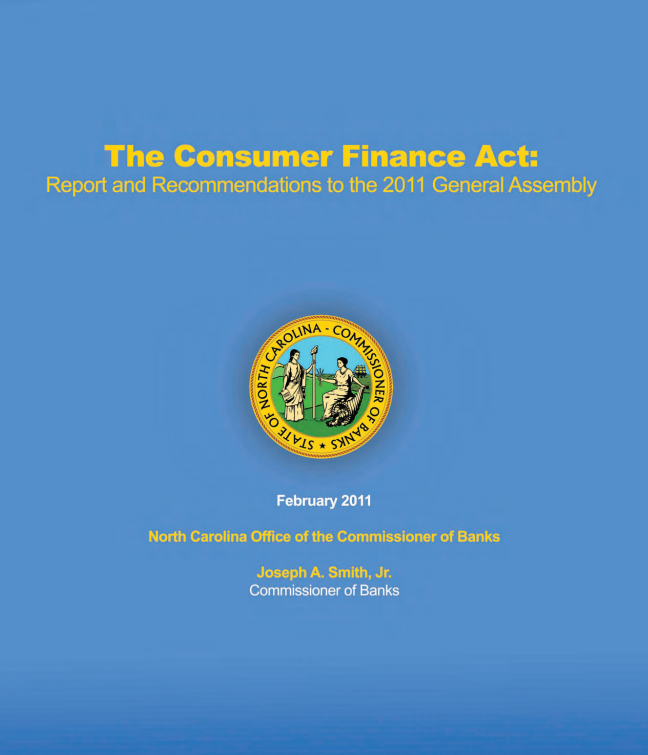 The modern consumer finance installment loan industry is nearly a century old. For 50 years, the industry in North Carolina has been regulated through the North Carolina Consumer Finance Act (G.S.53, the CFA or the Act). The CFA and other similar laws were originally passed when working people had few legal credit options; these laws were effective in driving out illegal loan sharking by providing a safe, accessible lending option. The CFA has evolved but stayed true to the fundamental principle of providing access to affordable, repayable credit. Today, the CFA governs the business of providing direct-to-consumer installment loans in amounts up to $10,000 for terms of up to seven years in a highly regulated manner.

The consumer finance installment loan industry is a product of public policy. This policy framework warrants occasional review as the world changes.  In this spirit, North Carolina lawmakers have reexamined the state of the consumer finance industry and the balance between lender viability and consumer protection. In the process, a legislative study commission, the Joint Legislative Commission on the Modernization of North Carolina Banking Laws and the Consumer Finance Act (the Commission) called on the North Carolina Office of the Commissioner of Banks (NCCOB) to conduct a more in-depth study. This report presents evidence from study group meetings, licensees’ annual reports, interviews, presentations, existing research, and reports and recommendations submitted to the NCCOB. The Commission’s overarching requirement was that the law contain appropriate consumer protections but also recognize the potential profitability of the lender. The CFA currently appears to adequately protect consumer interests, and provide a relatively safe source of credit for about 6% of North Carolinians. Most of these North Carolinians have bank accounts and credit cards, but they are more likely to be credit constrained and have relatively fewer affordable options. CFA strictures protect these borrowers from excessive costs associated with many of the alternatives.  At the same time, the consumer finance installment loan industry continues to demonstrate potential for profit under the CFA. Lenders recorded an aggregate profit in 2009. Over the past 12 years, the majority of licensees have been profitable, and the aggregate industry net worth more than doubled between 1998 and 2009. The decline among large national chains has dampened aggregate profitability for the industry in this state, but if we remove the national chains from the equation, we see a stable record of positive net income since 2001.

Nevertheless, the industry is not thriving. Lenders report difficulties raising debt and equity to fund growth or start new companies. In fact, industry growth has declined by several measures in relation to volume. Due to structural changes in the market, we see a long-term decline in the share of consumer credit provided by consumer finance companies. The efficient and convenient credit card has come to dominate consumer credit, eclipsing the traditional hands-on, bricks-and-mortar model of the consumer finance lender. In the short-term, retrenching by credit card lenders and banks may open opportunities for consumer finance lenders, but economic weakness may also reduce the number of qualified prospects.  Disentangling the short-term effects of the credit crisis from long-term fundamentals is challenging as the net effect of the credit crisis remains to be seen.