Make a Gift
Home / Research / The Foreclosure Generation: The Long-Term Impact of the Housing Crisis on Latino Children and Families 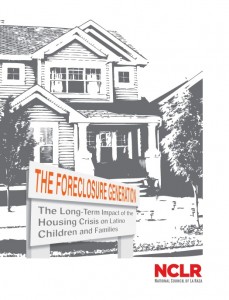 A joint report of the National Council of La Raza (NCLR) and UNC Center for Community Capital at the University of North Carolina at Chapel Hill highlights the findings from 25 interviews conducted with Latino families who had recently experienced a foreclosure.

Interviewers asked in-depth questions on a variety of issues related to the overall well-being of the family with a special emphasis on the status of their children. Interviews were conducted in July and August 2009 in five regions: southeastern Texas, southeastern Michigan, the west coast of Florida, 0northwestern Georgia, and the Central Valley of California.

Among the foreclosure impacts researchers uncovered: