Make a Gift
Home / Research / The Preemption Effect: The Impact of Federal Preemption of State Anti-Predatory Lending Laws on the Foreclosure Crisis 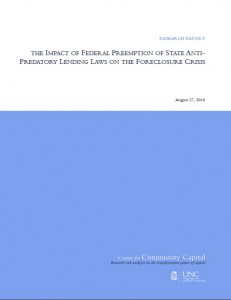 This paper examines whether  the 2004 preemption of state laws by the Office of the Comptroller of the Currency (OCC) led to deterioration in the quality and performance of loans originated by the lenders it regulates.

Using a large sample of privately securitized nonprime mortgages and a difference-in-differences approach, this study investigates changes in the quality and performance of loans originated by OCC lenders in states with and without anti-predatory lending laws, before and after the 2004 OCC preemption.

The results provide evidence that preemption resulted in an increased default risk for mortgages originated by OCC-regulated lenders in states with anti-predatory lending laws. In the refinance market in particular, the increase in default risk among OCC lenders outpaced that of independent mortgage companies, which remained subject to APLs after 2004.

Overall the results suggest the 2004 OCC ruling did contribute to deterioration in lending standards and a rollback in consumer protection during the subprime crisis.