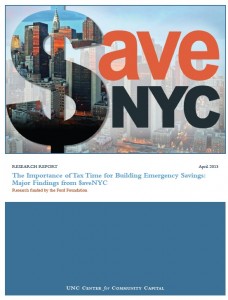 Saving is a critical first step on the path to financial security. But many low-income families find it challenging to choose saving for the future over meeting pressing spending needs today. Results from a study of one asset-building program, $aveNYC, offer insights on how New York City used tax refunds and a savings match to encourage low-income taxpayers to start saving and keep it up.

“The Importance of Tax Time for Building Emergency Savings: Major Findings from $aveNYC” reports findings from a three-year study of the program by the UNC Center for Community Capital and UNC School of Social Work with funding from the Ford Foundation.

The New York City Department of Consumer Affairs’ Office of Financial Empowerment created the $aveNYC program to help low-income households build emergency savings and increase their financial stability. The program targeted the tax refund as a way to allow families to build savings without taking money from day-to-day cash flow.

Participants – who had average annual incomes of $17,000 – signed up while having their taxes prepared at select Volunteer Income Tax Assistance (VITA) sites. They agreed to deposit from $200-$500 of their tax refund into a $aveNYC account. Those who maintained the initial deposit for one year received a 50 percent match. There was no penalty for withdrawing refund deposits before the end of the year, although those who did were ineligible for matching funds.

Based on these results, researchers recommend that policymakers find ways to encourage more programs like $aveNYC and its current replication, SaveUSA, now offered in New York, Newark, San Antonio and Tulsa; eliminate provisions in public benefit programs that prohibit recipients from saving more than $2,000 without losing benefits; and support development of other types of financial products that meet the needs of lower-income households.