Make a Gift
Home / Research / Was It Worth It: The Complexities and Contradictions in Assessing the Value of Higher Education 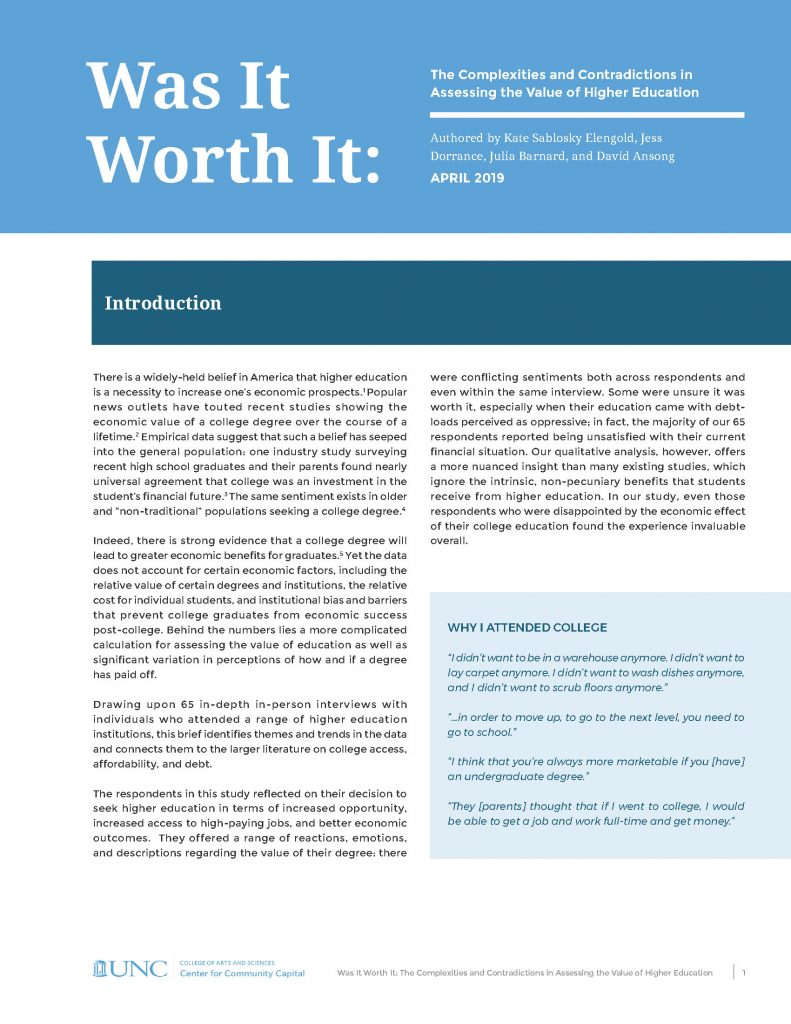 Higher education is widely considered to be a wise investment in the United States today. However, this belief may hide an inequality in students’ abilities to “convert on” a college degree, and the overwhelming impact high levels of student debt can have on financial well-being. We uncover previously un-discussed nuances in recent college graduates’ opinions about whether their degree was worth the cost.

There is a widely-held belief in America that higher education is a necessity to increase one’s economic prospects. Recent high school graduates and their parents are in nearly universal agreement that college is an investment in the student’s financial future; this sentiment extends to older and “non-traditional” populations seeking a college degree as well.

Indeed, there is strong evidence that a college degree will lead to greater economic benefits for graduates. But the data does not account for certain economic factors, including the relative value of certain degrees and institutions, the relative cost of higher education for individual students, and institutional bias and barriers that prevent college graduates from economic success post-college. Behind the numbers lies a more complicated calculation for assessing the value of education as well as significant variation in perceptions of how and if a degree has paid off.

Drawing upon 65 in-depth in-person interviews with individuals who attended a range of higher education institutions, this brief identifies themes and trends in the data and connects them to the larger literature on college access, affordability, and debt. The respondents in this study reflected on their decision to
seek higher education in terms of increased opportunity, increased access to high-paying jobs, and better economic outcomes. They offered a range of reactions, emotions, and descriptions regarding the value of their degree: there were conflicting sentiments both across respondents and even within the same interview.

Some were unsure it was worth it, especially when their education came with debtloads perceived as oppressive; in fact, the majority of our 65 respondents reported being unsatisfied with their current financial situation. Our qualitative analysis, however, offers a more nuanced insight than many existing studies, which ignore the intrinsic, non-pecuniary benefits that students receive from higher education. In our study, even those respondents who were disappointed by the economic effect of their college education found the experience invaluable overall.